How to Play Your Sq'Uke

Tabs - What are they?

Well, for starters, Tabs aren't a diet cola drink. Tabs (also called Tablature) are a way of showing you exactly which strings to play and when. They are like a musical score but more precise. The trouble with a stringed instrument is that a particular note can be played many different ways. If you played the open G string and the 3rd fret on the E string, you'd play the exact same note. Sometimes that's ok because it provides the player freedom.

I use Tabs to document a song after I've worked it out. Usually, I will spend time working on a song and then get it to the way I like it. That means the chords along with the melody. This works fine...until my memory fails me and I forget the first part of the song while working on the second part (B part in musical parlance). 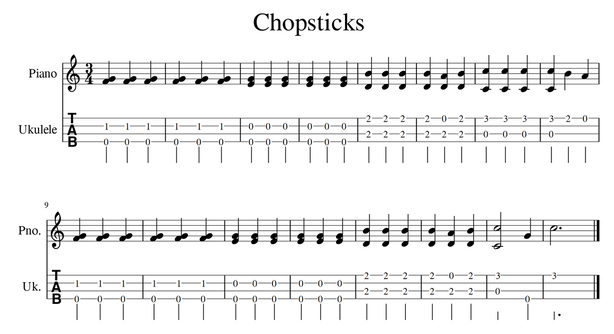 I've provided an example of what Tabs look like. As you can see, they look like very much like musical score, except instead of "little black dots", there are numbers.

The lines show the strings on a uke and the numbers are which string to pluck. Pretty simple.

How Do I Play From Tabs?

Lets follow through on this example. I've labeled the strings in green and the frets in blue to make things easier. Remember that the zero (0) fret is open meaning that you don't press anything.

​Hopefully, you get the idea. Keep following through on the example. and you should be playing chopsticks in no time. What you are trying to do is develop muscle memory. So keep playing again and again until you don't need to look at neither the strings nor the fretboard.